One of the things I wanted to have done for quite some time now was building a NAS from the ground up. Several weeks ago the two year old Buffalo Pro Duo capitulated such that I finally got my chance

Over the time there have been some things I wanted to try, but which the Buffalo NAS due to several reasons wasn’t able to deliver. So there were certain requirements the new NAS would have to meet:

After searching a bit I found the following combination appealing, which then also ended up in the NAS

The assembly was straightforward although one directly noticed that the Midi Tower is the cheapest link in the chain. The power supply’s radiator cowling was slightly poking out such that it didn’t exactly fit, but it worked somehow.

In the beginning I was pondering whether to choose FreeNAS or CentOS. Both are probably good choices, but since I don’t consider ZFS as the holy grail of file systems and I’m a passionate Fedora user the final choice was the CentOS 6.2 minimal spin. One of the main arguments for CentOS compared to other Linux distributions was that it has a long life cycle and ships quite up-to-date packages, although GRUB2 and systemd are for example missing. The kernel is shipped in the version 2.6.32, which is IMHO a bit old, as it turned out it doesn’t support the CPU temperature sensors out of the box (see below).

During installation I only had to deal with a small problem, that the installer wouldn’t want to boot from the UNetbootin-prepared USB stick in the beginning. Finally looking at the ASUS EFI bootmenu unveiled a second entry for the USB stick which choosing did the trick. From there on there were just some minor bumps on the road to a complete NAS:

The thing I was most curious about was whether the passively-cooled CPU would even sustain under full load, since there’s also a PRO Version of the motherboard which is shipped with an additional fan. So I started twice

and monitored the CPU temperature over time. The result can be seen below: 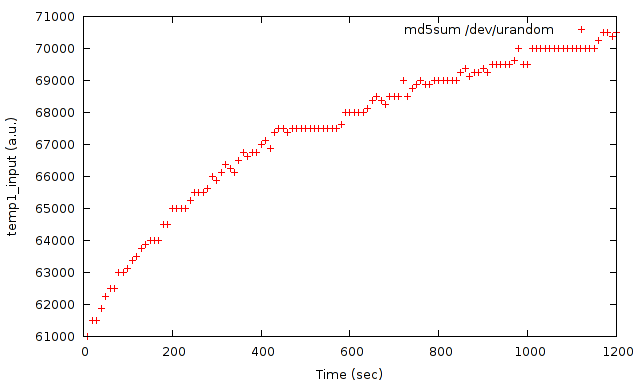 The first plot on a physicist’s blog and it doesn’t even have error bars, shame on me

It’s difficult to interpret these numbers as in the k10temp documentation is stressed, that temp1_input is given in almost arbitrary units. But k10temp gives one also the following values in the same units

According to the k10temp documentation the CPU is throttled to prevent damage once temp1_crit(_hyst) is reached, so operating a passively cooled E-350 in a NAS should be safe even under occasional load. At first I was a bit irritated of the temp1_max value, but apparently it seems to be just a dummy value (see k10temp source).

So far I’m quite content with the NAS, but there are still some benchmarks that I want to run and some options (e.g. spin-down time of the harddisks) which I want to tweak. Hopefully I’ll find some time to blog about it.